Hello! Thanks for visiting our web site. You may know us by another name such as kumera or yam, depending on where you come from, but here in Australia we're generally called sweet potatoes because of our delicious, sweet flavour. Did you know we're one of the few vegetables that can be used for both savoury and sweet dishes?

We're a popular and versatile vegetable that has been grown and eaten by many people around the world – we were a staple food of the Maoris, Polynesians and Melanesians to name just a few, and you Australians have certainly taken us to your hearts – after all what would a traditional Aussie baked dinner be without us. Though you like to eat us, you may not know too much about us – that's why we decided to have our own web site.

Let's get one thing straight right away. We're not related to the potato at all. We belong to the sprawling vine called morning glory. We do have to admit that our sausage-shaped tubers are a bit potato-like, but we taper to pointed ends unlike potatoes. Our skin is smooth and can be white, red, golden or purple. We have a sweet, white, yellow or deep orange flesh which can be either dry or moist.

We're generally available all year round with our peak being from May to July.

We're sold by colour rather than variety.

Kumera – We're a sweet potato which has a deep orange flesh. Other types are white, red and purple sweet potatoes.

Why Sweet Potatoes are Good to Eat

How are Sweet Potato Grown and Harvested

We prefer a tropical climate with long hot summer months and like to grow in a fertile, well-drained soil.

We can be grown from cuttings of healthy plants or by carefully removing a healthy sprouting root from a growing plant. These are grown in nurseries until the seedlings are about 15-20cm long. We're then transplanted into the ground. Our parent vine is very vigorous with long stems and broad, oval or arrow-like leaves. It produces underground tubers which are harvested when the vine has died.

Our skin is thin and delicate so great care is taken when we are harvested. If our skin is cut a milky white juice develops around the wound (similar to sap in a tree). This protects us from infection and water loss.

Select those of us with firm, smooth, well-shaped tubers with bright, uniform coloured skin. Skin colour varies with variety.

How to Keep Sweet Potato

Store us in a cool, dark place with good ventilation. Use within 2 weeks. Do not store us in the refrigerator. 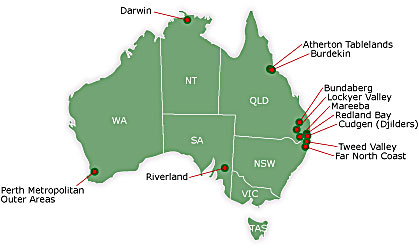 History of the Sweet Potato

We come from the tropical lowlands of Central and South America and Christopher Columbus is thought to have introduced us into Europe.

During the American Civil War when food rations were low, we served as a staple food for the troops for long periods of time. Captain Cook saw the New Zealand Maoris using us in the 18th century and we were part of the staple diet of the Polynesians and Melanesians long before the coming of Europeans.

There is a record of yams being brought to Sydney Town on ships of the First Fleet but it is not known whether this refers to us (in southern USA we're called yams) or the true yams. The fleet stopped at Rio de Janeiro on the voyage to Australia and it is quite possible that we may have been taken aboard the fleet there.

Our skin can be left on if scrubbed well, or we can be peeled. Our ends, however, should be removed. Slice, dice or bake whole, like potatoes. Saute, barbecue, fry or microwave. Serve us as a vegetable with roasts, stuff us, mash us on our own or add us to potato, use us in soups, sweet potato pies, cakes, scones or biscuits. In many recipes we can replace potato and pumpkin. We can even be candied!