Top o'the day t'you. Sure it's grand that you dropped by. Now, I know we potatoes have been residents of Australia since we were brought out with the Irish and English convicts in the First Fleet, but it's terribly hard to lose the accent, you understand. Oh yes, it's a rare and colourful history we have, to be sure, so sit back and I'll tell you more about us.

We're a close relative of tomatoes, you know, and capsicums and eggplants too. Our tubers are like washed river stones, rather smooth and rounded, varying in size and shape from round or oval to long and thin. We're covered in a fine, thin skin which encloses our soft, moist flesh. Our skin colour varies from creamy-to-white, yellow, red to even purple.

We're available all year round with our best value being from May to August.

We're sold by variety, size and whether we're washed or not. Washed – the soil covering has been washed or brushed away. Unwashed – we're sold with a thin coating of soil. Either way, we may or may not be sold by variety as well. Small potatoes are sold as cocktails and chats and are usually used whole. New potatoes are thin-skinned, moist potatoes which should be used quickly.

Sebago
(the most common variety) – we're an all-purpose potato with smooth, thin, creamy-white skin and white flesh. We're generally round to oval in shape with shallow eyes and are excellent for boiling, mashing and baking and are popular when made into French fries.

Pontiac
We have a bright red thin skin (which is difficult to peel due to our deep eyes). We're roundish in shape with a moist, white flesh, and deep set eyes. We're excellent for boiling, roasting, baking and for salads as we don't darken after cooking.

Desiree
We're long and oval with a smooth, waxy, pinkish red skin with creamy-yellow flesh. We're very versatile as we can be baked, boiled, mashed, microwaved, roasted and are also great in salads.

Pink Fir Apple
We're a tubular-shaped potato with a pinkish skin and firm, waxy, creamy-white flesh. We originated in France and love to be boiled, baked and microwaved.

Kipfler
German in origin, we're a long, oval potato with yellow skin and flesh and a really nutty taste. We can be steamed, braised, boiled, microwaved or used in a salad.

Pink Eye (also known as Tasmanian Pink Eye)
We're a small, oval to round potato with a creamy skin colour, blushed with purple. Our eyes are pink to purple and we're most suited to boiling, baking, roasting, microwaving and salads.

Russet Burbank (also known as the Idaho potato)
We're a long, large potato with a rough brown skin and white flesh. We're excellent for making chips and for boiling, baking and roasting.

Spunta
We originated in Holland and have a large, flattish, oval shape with smooth, yellowy skin without many eyes, and creamy coloured flesh. We're suited to boiling, baking, mashing, microwaving and deep-frying.

Nicola
We're a small to medium, round to oval-shaped potato with a beige-yellow skin and yellow flesh. We're a good all-purpose potato but especially good for boiling, mashing and microwaving.

Newer ‘boutique' varieties are available and more and more are coming onto the market. They vary considerably in shape, skin and flesh. Bintje, King Edward, Jersey Royal, Ratte, Purple Congo and Nadine are just some of these newer potatoes.

Why Potatos Are Good To Eat

How Potatoes are Grown and Harvested

We're small, green-leaved, plants which grow up to 50cm tall. As we grow our roots swell at their ends producing tubers (potatoes). Each plant consists of a number of small leaves attached to the main shoot by small stems.

We do blossom but our potatoes don't come from fertilised flowers. We form as a food store (tuber) at the end of our roots. Depending on our variety we take 90-130 days to reach maturity. If we are harvested before we reach maturity we're generally called a new potato, at which time our skin will be paper thin and easy to rub off.

Harvesting is determined chiefly by the maturity of the crop. When our tubers are fully grown, our stems and leaves die, and we're ready to harvest.

The main reason for waiting until we're fully matured before digging is that our skins ‘harden' after the vine dies, so there is less likelihood of bruising. We're generally mechanically harvested and collected in field bins for grading (according to size) and packaging. There are normally three grades, smalls, table and large. A further grade, called chats is also used when large quantities of small potatoes are available.

Select those of us that have firm, dry skin.

How to Keep Potatoes

Store us in a cool, dry, dark and well-ventilated place. Use within 7 days. 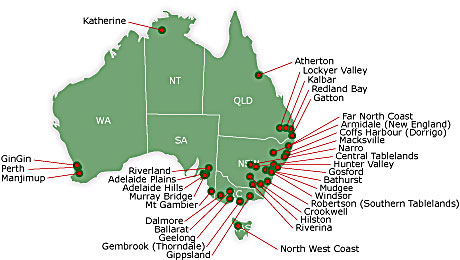 We originated in the Andes Mountains of South America and were used as long ago as 4000 BC. We were a major food source for South American Indian tribes in the 11th century and were recorded as being widely cultivated by the Incas in the early 1400's.

The first European record of us was in Spain in the 16th century, after being brought back from Columbia in 1593 by the Spanish Conquistadors. From Spain we spread quickly throughout Europe, reaching England in the late 16th century.

In England, Ireland and Scotland it took 200 years for us to be accepted as human food rather than for animal feed. When the Irish accepted us as a satisfying and nutritious food their population expanded rapidly because for the first time they were getting adequate nourishment.

However, a potato disease appeared in 1845 wiping out most of the Irish crop. This continued for several years resulting in widespread starvation in Ireland and over 1 million people died. As a result many Irish migrated to the USA and Australia in one of the largest exodus of people in recent history.

As I mentioned earlier, potatoes for the first settlement at Sydney Cove came out with the First Fleet and they quickly became a staple food of the new colony.

Tasmania started to supply Sydney with large quantities in 1830 and they were preferred to the local potatoes. In 1801 it was noted that Hobart Town had an English-like climate and potatoes were one of the crops successfully grown there. Western Australian settlers planted potatoes as one of the vegetables in the Swan River Colony in 1829. The first commercial crop was grown in Victoria in 1834 at Portland Bay.

One of the most widely used and important vegetables, we're the fourth most important food crop in the world.

Sometimes called ‘spuds', we're a very popular and versatile vegetable and can be baked, boiled, fried, barbecued, microwaved or roasted.

Scrub us with a brush and cook with the skin on, but remove any green sections. If skins have to be removed, peel thinly with a vegetable peeler and cook as soon as peeled.

Potato And Chicken Spiders
Cut 2 large potatoes into matchstick pieces. Rinse under cold water. Lightly mix 1 cup flour with 1 egg yolk and 1 cup ice cold water. Cut 250g chicken into bite-size pieces and drop in flour mixture. Drain and cover with potato. Deep-fry and serve immediately with plum sauce. (Any leftover batter can be used for other vegetables or fish.)

Potato Puffs
Cook 500g peeled and chopped potatoes in salted (optional) water until tender. Mash with 25g butter. Add 3 chopped shallots and 1/2 cup chopped celery. Beat 1 egg and add half to potato. Roll into 2.5cm balls and dip in remaining egg, then flour and deep-fry until golden, about 5 minutes.