You see it upsets us when people cry around us because we just want you all to be as happy as we are. I'm sure, when you get to know us, you'll realise we're nothing to cry over. Let me tell you more of our story.

We're onions, sometimes called common onions. We're a bulb formed from the bases of our leaves. Inside our bulb our leaves are tightly pushed against each other and are protected by our tough outer leaves. Long, green, hollow leaves extend from our bulb and, later, if not harvested we can produce a single flowering stalk.

We come in various shapes and colours, the most common being round to oval-shaped and slightly smaller than a tennis ball. Inside, we have thickish, moist, leaf bases which form concentric rings from the centre outwards. You can also buy torpedo-shaped onions, globe-shaped onions with really flattened tops and bottoms, and small egg-shaped onions which are often sold as pickling onions. In addition, you can choose white, brown, red or yellow onions.

We're not sold by variety in Australia. Normally we're sold by colour, sweetness or size.

Pickling Onions
We're small onions with thin, papery covering on our bulb. We're either white or brown and are used for pickling.

Larger sized onions are sold as brown, white, red or yellow, depending on outside skin colour.

Brown Onions
We have a brown skin and creamy flesh, are usually strongly flavoured and are suitable for cooking.

White Onions
We have white skin and flesh, are milder than brown onions and are suitable for salads, as well as cooking.

Red Onions
We have red to purplish-red flesh, and are sometimes called Spanish onions or salad onions. We vary in flavour and can be used raw in salads, as well as being cooked.

Milder forms of onions in various colours are called salad onions and are the most suitable to be used raw.

We can also be harvested before we mature. We can be pulled when we still have green leaves with a white end and small roots. There are two types – one with no bulb, the other with a little egg-shaped bulb. These immature onions are called various names including spring onions, shallots, scallions and green onions. They are used for stir-fries and salads.

We have another group of onion relatives, with a milder flavour, known as shallots, eschallots, or French shallots. These form a group of small, round to elongated, crescent-shaped bulbs which can have brown, golden-yellow, purple or grey skins. They are usually sold in Australia by colour or shape and their bulbs are half the size of a golfball.

Why Onions are Good to Eat

How Onions are Grown and Harvested

We prefer a temperate climate – that is a mild summer and a mild winter – however, the length of the days and temperature are the most important factors to ensure good quality. This will differ slightly between our varieties.

We have three main parts, our long green leaves, our roots and our bulb which barely appears above the ground. We prefer a sandy type of soil with good drainage or irrigation.

Harvesting starts when we reach maturity (which can take up to 6-8 months). At this point, we stop producing new leaves and roots, the nutrients still present in our leaves moves into our bulbs, and our tops, while still green, weaken just above our bulb and fall to the ground to die.

Mechanical onion diggers are used to harvest us. We're lifted, topped and tailed in the one process. Generally, we will lie in the field for a short period to allow our outer skins to dry out.

Select those of us which are firm, well-shaped with small necks and dry, papery skin. Avoid spongy or sprouting onions with uneven or patchy skin colouring.

How to Keep Onions

The smaller the onion the stronger the flavour. Store onions in a cool dry, dark place for up to 2 months. Wrap cut pieces in plastic and store in refrigerator. 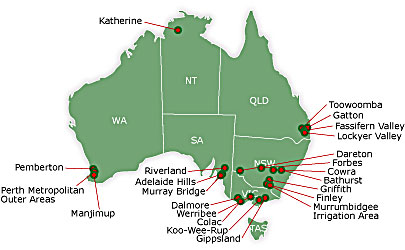 We're an ancient vegetable thought to have come from Central Asia. We have been grown for over 5000 years in Egypt, 2000 years in Italy and more widely in Europe during the Middle Ages.

In Ancient Egypt we held a special place in the vegetable hierarchy as we were seen as a symbol of the universe, and were represented in carvings in pyramids built between 2500 and 2200 BC. Along with beer and bread, we were also an important food for Egyptian peasants around 1200 BC and have been found depicted in many Egyptian tombs. We were also sold in the streets of Ur, in ancient Mesopotamia, 5000 years ago.

Greek physicians around 60 AD, prescribed us for eating, as well as for medicinal reasons. Richard II, King of England, had many recipes using us in his 1390 ‘cook book'.

Our seed was planted on Norfolk Island in March 1788, a short time after the First Fleet's arrival in Australia. The earliest records of vegetables for sale in the colony in the early 1800's included us at the price of 2 shillings and 6 pence per ounce. In 1835, brown, white, Spanish and bunching (Welsh) onions were being grown around Sydney.

We can be eaten fresh or dried, raw or cooked, as a vegetable, as an ingredient in other dishes or as a seasoning. Although our flavour can vary according to our skin colour, we can often be substituted for each other in recipes. The white onion is considered the mildest flavour, the red onion the sweetest.

Trim our root end and remove the dry papery outer skin before using us raw in salads, cold soups, sandwiches or as a garnish. We can be baked whole or steamed, with or without skin, boiled, barbecued or microwaved until tender, about 15-20 minutes, and served as a vegetable. Pan-fry us sliced or diced and serve with meat or fish; add us to sauces, crepes, casseroles, omelettes and tarts. Small white onions are usually pickled or cooked without skin and served as a vegetable.

To stop your eyes watering when peeling and chopping us raw, put us in the freezer for 10 minutes or the fridge for 1 hour.

Sausage Stuffed With Red Onion And Apple
Grill, boil or barbecue smoked sausage or kransky until heated through. Split down the middle lengthwise without cutting right through. Spread cut edge with French mustard and fill with pan-fried sliced red onion and apple.