You'll have to forgive us for being enthusiastic about ourselves but we just love being mushrooms. It's such fun being fungus – let me tell you why. We're mysterious, we grow by moonlight, well, at least wild ones do, and we are quite unlike any other food.

You see, we're not like most vegetables which are green, yellow, orange or red. We're white cultivated mushrooms and our edible part is our fruiting body which produces spores (seeds). We're the most commonly sold mushroom and consist of an umbrella-like head, which is white on top and pink underneath. Our underside section consists of soft gills which are like wheel spokes, radiating from the centre. As we age our heads open and become flatter and our gills darken. Other colour forms of cultivated mushrooms are sold and exotic mushrooms are also cultivated in Australia or imported.

We're available all year round.

Cultivated mushrooms (Agaricus bisporus) are sold by size. The sizes are buttons, cups and flats.

Buttons
We're picked before our heads open to show our pink gills. We're small, rounded and about 2-5cm in diameter.

Cups
We're the next stage in which our heads have started to open and our young gills are just showing.

Flats
We're mature mushrooms in which all our gills are seen and our head is fully open.

Oyster Mushroom
We're sometimes called abalone mushrooms. Available as pink, creamy-grey or yellow varieties, we're soft and fan-shaped, about 5-6cm long, with prominent gills on the lower side. We have a soft texture and delicate flavour.

Shiitake Mushrooms
We're the second most important cultivated mushroom worldwide. Our spongy, rich brown cap is approximately 4-5cm wide and our gills are a greyish-cream colour. We have a distinct flavour and spongy-meaty texture with a typical mushroom shape.

Enoki Mushroom
We have a slender, creamy-yellow body approximately 10cm long, capped with a head about the size of a small pea. We are mildly flavoured with a crisp texture. We're imported into Australia from China.

Shimeji Mushroom
We look similar to oyster mushrooms, however, we grow in clusters. We are a creamy-grey colour, 1-2cm thick and 4-5cm in length. We have a firm-tender texture with a mild flavour – similar to an oyster mushroom.

Some other cultivated mushrooms available in Australia are black fungi, white fungi and straw mushrooms. Field collected mushrooms such as, pine mushrooms and morels, are sold when they appear in the fields and forests.

Why Mushrooms are Good to Eat

How Mushrooms are Grown and Harvested

We're grown from spores which are the special reproduction organisms found in all fungus. There are up to 1 billion spores in every one of us.

We're grown in specially designed buildings where temperature, humidity, ventilation, pest and disease prevention, can be easily controlled. We're grown in substraight which is made from wheat straw, cottonseed meal and hulls, and chicken manure. These recycled materials are mixed and composted for three weeks before being put into trays and steam-heated to kill any competitor moulds.

Spawn, which are our seeds, is then mixed into this substrate and the beds are topped with peat moss. The process takes place in hygienic growing rooms and in about 12 days we start to appear.

Harvesting is done by hand. Each tray yields up to 5 crops or flushes over a period of six weeks.

Select those of us which are dry, firm and clean. Shape and colour should be characteristic of variety. Avoid any that are slimy, withered or damaged.

How to Keep Mushrooms

Store us in the refrigerator in a paper or cloth bag. Remove from the container if prepackaged. Best used within 3 days. 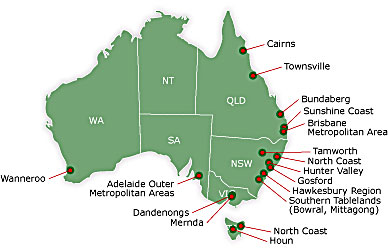 We've always been a part of human history. Of the many thousands of mushroom varieties only a few of us are edible, and we've been harvested and eaten as far back as the earliest records. Egyptian Pharaohs considered us such a delicacy that ordinary people were forbidden to eat us. Mushrooms, the hallucinogenic ones, were probably associated with religious activities and the poisonous ones could have been used by assassins to kill their victims.

However, commercial growing has been a much more recent phenomenon when the French began to grow field mushrooms in caves in the 17th century. In fact, the first authoritative article on mushroom production was written by a Frenchman, Monsieur Tourefort, in 1701. From France, we spread to England and from England finally to Australia.

In Australia commercial production started in the 1930's using disused railway tunnels – a far cry from today's sophisticated and modern facilities. Exotic mushrooms have become more available in Australia with the increase in Asian migrants.

We should not be washed or peeled before eating. Simply wipe over with a damp paper towel. Use both caps and stalks. If only caps are required in a recipe add stems to other dishes.

We can be eaten raw or stir-fried, grilled, barbecued, baked or microwaved. Use us in salads, soups, casseroles, crepes, as a vegetable or stuffed.

We blend with all sorts of flavours as you can see from these recipes:

Crispy Mushrooms With Creamy Dip
Wipe 24 medium mushrooms. Mix 1 1/2 cups crushed cornflakes and 1/4 cup sesame seeds in a small plastic bag. Dip mushrooms in beaten egg, drain and put in bag. Shake until well coated. Place on a greased tray and bake in moderate oven for 20 minutes or until cooked. Mix sour cream with garlic and tarragon. Serve as a dip with mushrooms.