Hello, I'm a leek and I'm the national emblem of Wales – the land of my fathers where every valley rings with the sound of singing. It's because of me and my family that the Welsh are such great singers, you know, because they eat a lot of us and we strengthen and improve the singing voice, or so they tell us.

The Welsh love us so much that they wear us as a badge on St David's Day (Saint David is the patron saint of Wales), and we join in all the singing and celebrating. Now this is an ancient tradition dating from the time when Welsh King Cadwallader and his troops went into battle against the Saxons in 640 AD wearing us as their distinguishing emblem – so they wouldn't kill their own side during the fighting. The Welshmen won the battle and ever since we've been a national hero.

Now, don't you let those daffodils tell you that they're the national emblem. It's true that they're the floral symbols of Wales but we're the plant which stirs the blood of Welsh people around the world. Let me tell you our story.

Like other onions, we're part of the lily family, and we have a sweet, mild onion taste. We're a round, cylindrical vegetable about 10-35cm long by 3-6cm wide, with a slightly thickened, white base. Our thick, fleshy stem consists of an elongated bulb and long broad leaves which tightly enclose each other. Our stem is white because it is blanched (or whitened) when it is being grown. Our leaves shade from white at the base to dark blue-green at the top.

We're available all year round with our best value being from March to October.

We're not sold by variety in Australia, however, small leeks are grown and sold as baby leeks.

Why Leeks are Good to Eat

How Leeks are Grown and Harvested

We're extremely hardy, tall plants which can grow up to 1.5 metres. We have a whitish long stem topped with grey-blue, broad, strap-like, pointed leaves. We are generally grown in trenches or with the soil piled up around the lower part of our stalk to exclude the light. This ensures that our stalk is very white and tender to eat. This process is called blanching.

We're harvested, mostly 5-6 months after planting, by pulling us whole from the ground. Our roots and leaves are then trimmed. We're more difficult to harvest than other onions because we're deeper in the soil and our roots are more active and matted at the time of harvest.

Select those of us with clean, crisp, white bottoms and fresh-looking tops. Small to medium-size leeks are the most tender and have a mild, delicate flavour.

How to Keep Leeks

Store us in an airtight plastic bag in the refrigerator crisper. 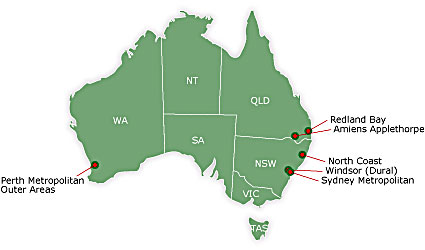 We were enjoyed in Egypt as long ago as 3000 BC, making us a very ancient vegetable. The Romans relished us and we were probably spread through Europe to the British Isles by the Romans during their conquests.

Our seeds were brought to Australia in 1788 on the First Fleet and we have been popular here ever since.

Trim off our roots along with any tough green tops. Peel off our outer layer, then cut through our green tops to about 6mm from the white part. Spread the leaves and wash under cold water to remove any dirt.

We can be steamed, boiled and microwaved, about 6-8 minutes. We're delicious added to soups, casseroles, sauces, quiches, served as a vegetable or stuffed. We can be used instead of onions in many recipes.

Leek Salad
Boil 5 thinly sliced leeks in boiling water until tender. Drain. Arrange on a dish with 4 hard-boiled eggs, cut in half. Mix 3 tablespoons mayonnaise, 1 tablespoon of sour cream and 1/2 teaspoon tarragon and pour over salad.