Hi. I'm so glad you've dropped by because people get some funny ideas about my family and I'd like to put the record straight. Did you know that the Romans believed that snakes sucked our juice in order to improve their eye sight; that the Greeks believed we were a slimming aid and gave us the name marathron meaning to ‘grow thin'; and that during the Middle Ages our seeds were chewed in church because it was thought they would prevent tummy rumbles from hunger pangs during long services? It's amazing what some people will come up with! Anyway I'm glad of the chance to put you right.

For a start, I'm a roundish, bulbous vegetable, about 8-12cm in diameter, with a mild licorice smell and taste. My large swollen base consists of several overlapping broad stems, forming a white to very pale green-white, firm, crisp bulb. When we're cut you can see the layers of our overlapping stems.

We're at our best from July to September.

In Australia we're not sold by variety. Our leaves, with short stems attached, are sold tied in bunches; our bulbs are sold individually.

Why Fennel is Good To Eat

We're an aniseed or licorice smelling and tasting plant, which come in two forms – without or with a swollen leaf base.

We grow easily from seed and are generally planted in early Spring. We're a tall plant growing to nearly 2 metres, with fine, green, feathery leaves and a small bulb at the base of the plant. Our leaves are used as a flavouring and our bulb is used as a vegetable. We're harvested when we're mature by cutting our base from the roots just below our bulb.

In Australia the non-bulbous form has become a major weed along roads and train lines.

Select those of us with firm, crisp, pale bulbs with feathery fresh leaves.

How to Keep Fennel

Refrigerate us in the crisper section. Use within 5 days. 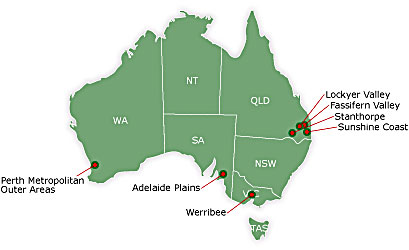 We're an ancient plant thought to have come from coastal regions around the Mediterranean. The Romans used us as a food, as well as a medicine for good health and preventing obesity. They cultivated us as a garden herb and we were so widely used that there were few meats seasoned or sauces served without us.

The Anglo Saxons also used us as food and medicine. To them we were a sacred plant, being one of nine herbs revered in early times.

It was not until the Middle Ages, though, that Italians, driven by famine, first used us in cooking.

Some of our seed was brought out with the First Fleet in 1788, but what happened to it no one knows. It wasn't until the 1950's that our popularity increased in Australia due to the immigration of southern Europeans.

The slight aniseed or licorice flavour and crunchy texture of our bulbs makes an interesting combination in recipes. Try substituting us for celery, bean sprouts or even onion in some recipes. Use raw in salads or cook and serve as a vegetable, in casseroles, soups, lasagna.

Boil, bake, steam, stir-fry or microwave until tender, 7-8 minutes depending on size and quantity. Tops and bases should be trimmed before use and hard cores removed. Remove outside leaves if they are very tough. The feathery tops can be used as a garnish and fennel seeds can be used for extra flavour.

Here are some fun fennel recipes to try:

Fennel And Apple Soup
Dice and saute 2 fennel, 1 green apple, with skin on, and an onion for 3-4 minutes. Cover generously with chicken stock and simmer, with lid on, for 15 minutes. Puree and serve with a spoonful of yoghurt.

Fennel Strudel
Saute 1 grated carrot, 3 cups shredded fennel, 2 chopped zucchini and 4 shallots until soft. Cool and stir in 300ml sour cream, 2 tablespoons plain flour and 1 tablespoon soy sauce. Brush 6 sheets of filo pastry with melted butter and stack on top of each other. Spoon mixture down the centre of the pastry, fold sides in and roll up like parcel with join underneath. Brush with melted butter and fennel seeds and bake until golden.