Hello. Thanks for dropping by. So, you want to know about eggplants do you? Well, I'm glad because we're a very interesting vegetable. Now some people mistakenly think we originated in the Mediterranean countries of Greece and Italy, but I'm here to tell you that my ancestors were a delicacy enjoyed by the Emperors of China as early as 600 BC.

Fashionable ladies of that time, apparently, used a dye made from our skins to stain their teeth black, which was considered stylish – I can't think why – it'd look pretty yukky to me. But then there's no accounting for fashion! Anyway, I'll tell you more about our history later on. For now, let me tell you a little about me and my family.

We eggplants, or aubergines as we're sometimes called, grow on a bush, which produces variously shaped fruit over a long period of time. Our most common type is the glossy, smooth skinned, tear drop-shaped eggplant which has dark purplish satin-like skin. Inside, our spongy flesh is white to creamy-white with many small edible seeds.

Our stem and the star-like leafy calyx are covered in short spines and are attached at the narrowest end. Others of us come in long and thin, round or egg shapes with colours ranging from white to white with red stripes to deep purplish black.

We're at our best from January to July.

We're not sold by variety in Australia. However, our shape and colour are important. Although most of us are purple and oval to pear-shaped, you can get white, lavender or red striped long sausage-like types from time to time, as well as small round eggplants in a range of colours. Pea or Thai eggplant are small, green, pea-like fruit which cluster at the end of small branches. Pea eggplants are used in Asian cooking.

Why Eggplant is Good To Eat

Our parent plant is a medium sized bush, 50-100cm high which requires long warm summers to provide good quality fruit. Seedlings are usually grown in nurseries and then transplanted into the fields when they are about 8 weeks old.

Harvesting takes place 60-70 days after transplanting, when the eggplants have an all-over colour and are of the right size. Once we're cut from the bush, we're handled very carefully as our skins are very thin and easily damaged.

Select those of us with smooth, firm, satin-like, glossy, skin. We should feel heavy for our size. Avoid any with brown or soft spots and dull skin.

How to Keep Eggplants

Store us in the vegetable crisper or in an unsealed plastic bag in the refrigerator. Use within 5 days. 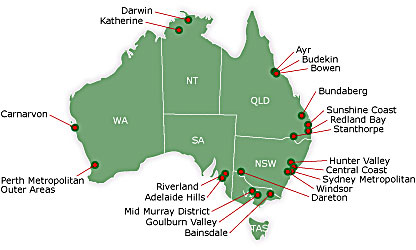 As I mentioned earlier, we were being cultivated in China as early as 600 BC but it's thought that we originated in India before that. From India we spread to the Middle East and became a popular Arab food. When the Arabs conquered Spain they took us with them and by the 16th century we were being grown throughout Europe.

It appears that we were unknown in Australia until after 1850 when a nurseryman, John Baptist, obtained some seed from a gentleman who had lived in India. However, we didn't become popular and even in the 1930's, we were considered a neglected vegetable by seed producers. It wasn't until the arrival of European migrants in the 1950's that our popularity soared.

We're usually cooked in a variety of ways before eating. Bake us whole, halve and stuff us, or chop us up then steam, grill or barbecue. Serve us as a vegetable, in salads, as a dip, in casseroles or sauces.

Wash and cut off stem end. Older eggplants need to be sprinkled with salt and left for 30 minutes to extract bitter juices. Pat dry with paper towel before cooking. Young plants need no salting and are great cooked whole.

Our seeds can be bitter, especially if crushed. This is why when making baba ghannouj – the popular eggplant dip – you should mash the cooked flesh with a fork rather than mashing it in a food processor or blender.

Eggplant Sandwich
Slice 2 medium eggplants into 1.5cm thickness. Salt and pat dry. Mix 250g chicken mince with 1 tablespoon each soy sauce and white wine. Brush eggplant slices with oil. Spread layer of chicken on one slice and top with another to form a sandwich. Dust with flour and dip in batter. Pan-fry or deep-fry and serve with mayonnaise seasoned with wasabi (Japanese horseradish) or horseradish.