Hi, how are you doing? Let me introduce myself to you. I'm a cauliflower – a cousin of the cabbage family. I expect you don't know too much about me, except perhaps that I'm nice when covered in a creamy cheese sauce, so let me tell you more about me and my family.

As I said, we're part of the brassica or cabbage family – which means we date back to ancient times. We have roundish heads (about 20cm wide), which are creamy-white to pale cream in colour and look like a fluffy white cloud. When cut in half we look like a dense rounded tree with the main white branch dividing into many small branches which end in a mass of white to creamy-white flower buds or ‘curds'.

We're generally available all year around.

We're not sold by varieties.

Why Cauliflower is Good To Eat

We prefer to be grown in cool, dry weather, on clay-like to sandy soil with plenty of access to water. We're grown from seedlings, which are generally grown in a controlled environment like a nursery, then transplanted into the ground. We're ready for harvesting when the ‘curds' are large and firm.

We have large, spreading, green leaves at our base which surround, but do not completely cover, our central stalk which bears a large round tightly packed mass of white to creamy-white curds, so called because it looks like milk curds. If we were not covered with leaves while growing, instead of little white curds we would form lots of small, yellow inedible flowers.

We're harvested when our head is still firm and has reached the appropriate size. A farmer will check our heads up to 5 times to ensure we're ready to harvest which is done by cutting our stem off at ground level.

To choose the best of us select firm, compact, creamy-white heads with florets pressed tightly together. A yellow tinge indicates over-maturity. Any leaves should be bright green and crisp.

How to Keep Cauliflower

Refrigerate us unwashed, stored in a plastic bag with our heads turned downwards. 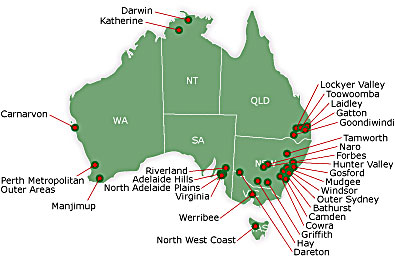 We're mentioned as coming from Syria by a Spanish Arab in the 12th century. We spread from Crete and Malta to the Italian mainland in the late 14th century and from there into Europe. It took until the end of the 18th century for us to become popular throughout Europe and England.

Along with other vegetables, we were planted on Norfolk Island in March 1788. A letter exists from Governor Arthur Phillip, the first governor appointed by the British, to Sir Joseph Banks telling him that ‘colly flowers' had been growing at Sydney Cove for weeks. We were also recorded as growing in a garden at The Rocks, Sydney, in 1803 with some being as large as 4.5 – 5.5kg. It's obvious we were an essential vegetable in the early life of the colony.

We can be eaten raw or lightly steamed for dips and salads. We're usually broken into flowerets before cooking and served as a vegetable, in soups, casseroles or with creamy sauces.

Remove any tough outer leaves at our base which can be used in soups and stir-fries. If any insects are present soak flowerets in water with 1 teaspoon each of salt and vinegar before cooking. Boil, steam, stir-fry or microwave, about 4-6 minutes, depending on quantity.

Try these cauliflower recipes for something different.