G'day, mate. I'm a pineapple from sunny Queensland and it's beaut to meet you. Let me tell you more about me and my family.

Although we look like a rough, spiky, pine cone we're really a group of smaller fruits which have fused together around a central core. Oval-shaped, 20-30cm long and 10-15cm wide, we have a tuft of short, sharp, grey-green leaves rising from our top.

Our skin is rough, with scale-like segments; each scale has a sharp, pointed tip which curls upwards. Our skin colour varies from creamy-green to yellow-orange with our flesh colour pale yellow to golden yellow. Inside, we contain juicy, slightly fibrous segments, formed from each of our small fruits, attached to a firm central core.

We're generally available all year round with our best value being from November to February.

• We were given our name because an explorer thought we looked like a pine cone
• European explorers discovered us almost 500 years ago
• Once picked, we don't get any riper. We become juicier, but not sweeter, once we're harvested.

In Australia we're sold as rough leaf or smooth leaf.
• Rough leaf – We have a very rough, spiky surface and very sweet juice.
• Smooth leaf – We are larger and juicier than rough leaf pineapples.

Why Pineapples are Good to Eat

• We contain an enzyme that can tenderise meat if used in a marinade
• We're a good source of vitamin C.
• We a good source of dietary fibre
• We're a source of a mineral called manganese. We don't hear a lot about manganese, but it's needed by our bones and for the cartilage in joints as well as the brain.
• Our natural sugars include mainly sucrose but we also have some fructose and glucose.
• 100g of our flesh has 180kJ.

How Pineapples are Grown and Harvested

A native of Brazil, we grow well in warmer areas of Australia. Our parent plant has a strange-looking and formidable appearance with dense, spiky leaves. Growing 60 to 120cm high it's characterised by rigid, grooved leaves which have sharp spines along the edge and pointed tips. It is grown from the crowns or the suckers of the plant (not from seeds). Each plant will only produce one of us each fruiting season.

Our parent plant's blue-green, sword-like leaves are arranged like a spiral staircase and its flowering stalk emerges from the centre of the leaf coil. These leaves retain their moisture making them a crop that can survive in very hot, dry conditions.

The stalk has a cluster of flowers, which are purplish to lavender in colour, which appear about 16 months after the pineapple has been planted. We are a multiple fruit, which means we grow from a cluster of fertilised flowers that join together. The flowers are also known as the eyes of the fruit and there are approximately 150 on each mature pineapple.

After planting we take up to 2 years to be ready for harvesting. After we have been cut from the plant another fruit will start to develop. This can continue to occur for up to 50 years.

Select those of us which are plump with fresh looking skin and leaves. We should have a sweet, pleasant aroma.

How to Keep Pineapples

Pineapples do not ripen further after harvesting. Store in a cool place. Once cut, cover and refrigerate. Use within 2 days. 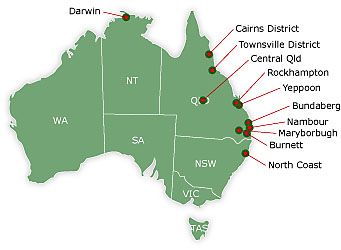 We're a native of Brazil from where we spread to the West Indies, Mexico and northern South America. We were cultivated by the Indians long before the arrival of Christopher Columbus in 1492.

Columbus is said to have taken us to Spain where we became known as the ‘pina de indies' (pine of the Indies) because it was thought we looked like pine cones. Another name, used in Europe, is ‘anana' which is a South American Indian word for ‘excellent fruit'. The name pineapple was first recorded in England during the late 17th century.

Grown more as a glasshouse plant in cold climates, it wasn't until we began to be imported from the Azores that we became popular in Europe. The Portuguese are thought to have introduced us to India in the 16th century and we appear to have been introduced into Australia by the Lutheran missionaries from India. Today, we are produced commercially in Australia, the West Indies, the Azores, Hawaii, Brazil and South Africa and other climatically suitable countries.

We're delicious raw as a snack or over breakfast cereal. Simply cut across us into thick slices and cut skin off. Remove the hard core with an apple corer or knife. For a more decorative presentation cut us in half lengthwise including the leaves. Cut the flesh out and fill the pineapple shell with salad or fruit salad.

We contain an enzyme which prevents some dishes setting or cakes and breads from rising properly. We must, therefore, be added at the last minute or cooked before use. Grill, bake, poach, microwave or pan-fry and add to cakes, bread, muffins, sherbets, puddings, biscuits or meat.

Pineapple And Ham Muffin Pizza
Split muffins in half and spread each half with tomato paste. Sprinkle with chopped ham, pineapple pieces, grated mozzarella and tasty cheese. Put on an oven tray and bake at 190ÌC for 15 minutes or until golden.

Frozen Pineapple Pieces
Peel and cut pineapple into bite-size pieces. Put on a toothpick and freeze for a refreshingly cool real fruit ice block. For variation roll in toasted coconut before freezing.