Hi! Nice to meet you. Come on in and make yourself comfortable.
Have you ever thought how often our name is used to describe something good?

‘Ah, it's a peach of a day!'
‘Everything's peaches!'
‘She has a complexion like peaches and cream'.

It's so nice to be so highly thought of, but there's more to us that just our looks you know. Let me tell you about us.

We're a stone fruit, related to nectarines, cherries, plums and loquats. We have soft, fuzzy skin which is red on a yellow to pale yellow background. Our flesh can vary from almost white, yellow to almost red. Each of us has a pointed, furrowed, egg-shaped seed in the middle which comes away easily (freestone), or is difficult to remove (clingstone).

Availability
We're at our best from November to March.

Did you know?
• Our juice is an excellent moisturiser and peach kernel oil, like its close relatives almond oil and apricot kernel oil, is widely used in cosmetics as it has a wonderful moisturising, nourishing and healing effect on the skin. It's also excellent for massage
• We're considered a symbol of immortality and friendship and are found in many Chinese paintings, on porcelain and in poetry as far back as 551 BC
• The Romans called us ‘Persian Apples'
• We're a member of the rose family and are related to the almond.

Varieties
Although there are hundreds of different varieties of us we are mainly sold by flesh colour – yellow-fleshed or white-fleshed. Some of our varieties are Spring Lady, Sweet Scarlet, Desert Red, Red Jenni, Flamecrest, Early O'Henry, Merit, Tatura, 211, and Oktoberfest.

Why Peaches Are Good To Eat
• We're sweet, with most of our natural sugar in the form of sucrose
• We're a good source of vitamin C and provide small quantities of other vitamins and minerals, especially potassium.
• We're a good source of dietary fibre
• Yellow-fleshed peaches also supply beta carotene, which the body converts to vitamin A
• Weighed with our stones, we contribute 175 kJ/100g.

How They are Grown and Harvested
Our parent plant is a small deciduous tree, 5-7 metres by 3-5 metres, with long, narrow, leaves which have very finely serrated edges. Its flowers can vary from deep rose-pink to almost white.

Our parent tree prefers a light sandy well-drained soil where the climate conditions do not get too cold. After planting the seedling it can take up to 4 years before it produces edible fruit. We're picked when mature by hand to avoid damage to our delicate flesh.

Choosing Peaches
Select those of us which are firm and plump that yield to gentle pressure. Avoid green, extra-hard, bruised or blemished fruit.

How to Keep Peaches
Ripen fruit at room temperature. Refrigerate ripe fruit in an unsealed plastic bag. Use within 2-3 days. 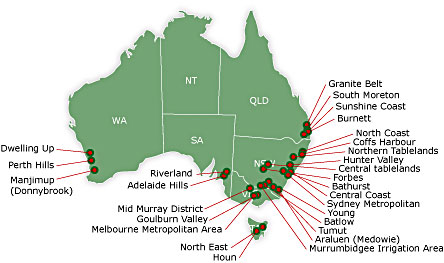 History of Peaches
We have an ancient history. We were first cultivated in China 2400 years ago and were carried along the old silk routes to Persia (Iran). For some time many people thought we originated in Persia, rather than China.

China's claim as our land of origin, rather than Persia, is supported by the fact that Chinese literature records us as far back as 550 BC, and also because wild peaches are found in China, but not in Persia.

We were known to the people of the Mediterranean in the 1st century. There are ancient Roman frescoes depicting large peaches similar to those grown today.

Anglo Saxons had a word for us and it's obvious that peaches must have come early to Britain, possibly with the Roman invaders. During the reign of Elizabeth I we, along with nectarines, were being cultivated in England. The Spanish took us to South America in the 16th century. By the 18th century we were being grown in California and in Australia by the 19th century.

Fun Ways to Eat and Cook Peaches
We're a luscious fruit, to be enjoyed fresh or cooked. Serve us with ice cream, over cereal, added to fruit salad, sauces, crepes, cakes, as a drink, with meat or you can candy us. Stew, poach, bake, saute, grill, microwave or barbecue.

Like nectarines, we have clingstones or freestones, which should be removed before eating. We should peel easily if we're ripe. Run a knife blade from our top to our bottom then peel our skin off. To peel a large quantity, drop in boiling water for a minute and then into cold water. Our skin will easily come off. If not using cut peaches immediately brush with a little lemon juice to stop us browning.

A few interesting peach ideas for you to try:

Marshmallow Peaches
Cut peaches in half and remove stone. Place a marshmallow in each half, sprinkle with a little brown sugar and coconut and grill until lightly browned. Serve with ice cream or yoghurt.

Peach And Prawns Kebabs
Soak bamboo skewers in water for 30 minutes. Peel and dice peaches and thread alternatively on skewers with prawns. Brush with melted butter seasoned with a dash of Tabasco and chopped coriander. Grill or barbecue until cooked through.