Good to meet you, thanks for stopping by. Now, just in case my name confuses you, you won't find me growing on a vine. The truth is I'm a juicy citrus fruit with an interesting history. It's believed that my ancestors came from the West Indies and were a cross between the pomelo and the orange. However, if Napoleon hadn't lost the battle of Trafalgar we might not exist as you know us today. Let me explain.

We were developed in Florida by a French surgeon from Napoleon's army who was captured at Trafalgar by the British and sent to the their penal settlement in the Bahamas as a prisoner. There he encountered my ancestors. On his release he went to the USA and later established citrus plantations in Florida before going on to develop us. So you see Napoleon's loss was your gain!

Let me tell you a little more about my family. As I said we're juicy citrus fruit with a slightly sour, but pleasant, taste. We're almost round, often with a flat bottom and a slightly tapering neck. We're normally, thin-skinned and yellow, but some of us do come in red and red-blushed colours.

Inside, we're divided into distinct segments by thin, white membranes which radiate from the centre like wheel spokes. Our very pale yellow flesh comprises hundreds of small translucent juice sacs. Some varieties are seedless and others have reddish-orange flesh.

Availability
In Australia we're generally available all year round with our best value being from April to November.

Did you know?
• Botanically we're a berry
• It's thought that we came by our name because we grow in clusters, looking like a big bunch of yellow grapes
• We contain a substance that can interfere with the action of some medical drugs.

Varieties
We're usually sold by colour and variety. Pigmented varieties, with a red blush, are becoming increasingly popular because they are often sweeter than the yellow varieties. Let me introduce you.

Why Grapefruit Are Good To Eat
• We're rich in vitamin C and compounds called bioflavonoids that help protect your body against infections.
• Pink grapefruit are one of the few good sources of lycopene (tomatoes and watermelon are the other major sources). Lycopene is one of the carotenoid family and it's being investigated for some health benefits in adults
• We supply dietary fibre.
• 100g fresh grapefruit flesh has 140kJ

How They are Grown and Harvested
We're one of the larger citrus fruits, produced on an evergreen, rounded-shaped tree, which grows up to 5.5 metres tall. Our parent tree has large, glossy green, oval leaves, with white fragrant flowers which form fruit after fertilisation. When young the tree is sensitive to cold weather, so grows much better in a tropical climate.

We grow in clusters and resemble a large bunch of yellow grapes. Once we've been picked we don't ripen further. We're picked by hand to minimise damage.

Choosing Grapefruit
Select those of us with glossy, golden skin. We should feel heavy for our size.

How to Keep Grapefruit
We're harvested ripe and ready to eat. Store at room temperature. Use within 7 days. Extend storage by refrigerating. 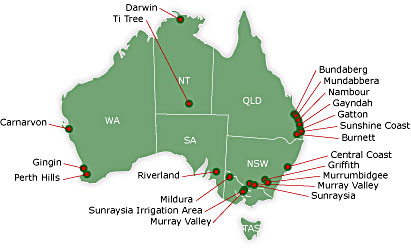 History of Grapefruit
As I mentioned before, it's thought that we're a natural cross between the sweet orange and the pomelo, but no one really knows. We were first recorded in 1823 and scientifically named Citrus paradisi soon after in 1830. Cultivation started on a large scale in the USA in the mid to late 19th century and now we are grown in all citrus producing areas of the world.

Fun Ways to Eat and Cook Grapefruit
We're delicious eaten raw with a little sugar or over breakfast cereal, in salads, fruit salads, sorbets or drinks. We can be halved and served in our skins. Remove seeds and cut between flesh and the white membrane and in between segments so we're easier to eat. There is even a special grapefruit knife available to make this job easier.

We can be sauteed, grilled, barbecued and served with vegetables, added to grilled sandwiches or sauces.

Here are a few ideas to get you started:

Grilled Grapefruit
Halve and cut a grapefruit into segments leaving flesh in the skin. Mix 1 tablespoon each of brown sugar, coconut and flaked almonds. Sprinkle over fruit and grill until lightly browned.