Hey man, what would you do if you found a blue banana? Try to cheer it up, of course! Bad joke – OK. Can you do better?

Now, you may think you know all there is to know about us. Well, you're wrong, man – there's more to us than just our cool crescent shape, smooth, yellow, soft, pliable skin and edible, seedless, creamy-white, sweet flesh. You'd better believe it!

Did you know we come in green and red colours too? Cool. And although most of us are about 20cm long and 4-5cm wide, we can be as short as 15cm (that's cool) or as long as 25cm (even cooler) – it just depends on our var-i-e-ty.

In Australia you can buy us all year round but we're at our best between April and June, then August and October.

In shops we're sold by our variety, colour and use. Our biggest bunch is the Cavendish clan – you know, the long, thin yellow fellas. Then there's the Lady Fingers (they're short and fat, but don't call them weight challenged – remember that when you're buying them – have a little respect!). They're called dessert-type bananas because of their sweetness. Other dessert-type bananas are Gold Finger (no relation to James Bond's arch enemy) and Ducasse (sounds like a great name for a cool car). Let me introduce you to them individually.

Cavendish or Williams
We're long (20-25cm) and thin (4-5cm) and our skin is yellow and we're the most commonly sold banana in Australia.

Lady Finger
We're a sweet banana – you'll like us. We have bright yellow skin and creamy coloured flesh. The Cavendish bananas say we're shorter (about 15cm) and fatter than they are, but they're just mean – they think they're so popular. But we know that good things come in small parcels!

Gold Finger
We're a new variety and we're sure you'll like us. We are larger than Lady Finger with rounded ends and a distinctive, tangy taste. We're great in fruit salads because we don't brown when we're cut.

Red types or Red Daccas
We're also new kids on the block and people say we have attitude because we're red, man, but really we're just misunderstood. We're similar to the yellow-skinned bananas except our skin is red and we have a very sweet red to pink flesh – we're a great dessert-type banana.

Plantains
We're sold green and used as a vegetable and we're usually much longer and fatter than the dessert-type bananas such as Cavendish, Lady Finger, Gold Finger and Red Dacca. We have a thick green skin and starchy flesh and are generally used in Asian cooking.

Why Bananas Are Good To Eat

Our parent plants are palm-like, soft-stemmed herbs which can grow very tall. They are classed as herbs because they don't have a strong woody stem. They grow best in warm, humid conditions where there's good soil drainage. Although they are a perennial plant (long lasting) each of their stems only flowers and bears fruit once.

After planting our parents will start to produce us in about 12-18 months.

We grow in layers in a large bunch which hangs down from the point where the leaves are attached to the stem. A layer is called a hand and each hand has fingers (what else?). Each finger is one of us. (Hey man, you think you're the first to make that joke – we get it all the time!) There can be 8-12 hands per bunch and 12-16 of us in every hand. In Australia, we're usually sold in hands.

We're harvested when we're mature but still green. This is because if we're allowed to ripen on the plant we tend to split and bruise easily. To protect us from damage and to help us grow, a plastic bag is placed over each new bunch as it appears.

We're harvested by hand and it usually takes two people working together to do this because each bunch weighs an average of 40 kilos. After harvest, the stems are cut down to make room for new growth. We're then sent to markets across Australia where we're ripened in large storage compartments under controlled conditions. Ethylene gas, which is a natural gas given off by all ripening fruit, is used to ensure we ripen evenly.

It's best to select a range of us at different stages of ripeness. That way we won't all ripen at once, and make sure you choose those of us with shiny, unblemished skins.

How to Keep Bananas

Ripen us in a fruit bowl at room temperature. When ripe we can be stored in the fridge. Our skins will turn black but our flesh will be unaffected. 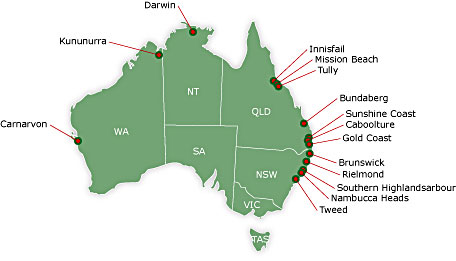 In Australia, we're mostly grown in Queensland, northern New South Wales, the Northern Territory and Western Australia, and we have a long and interesting history in this country. Over 100 hundred years ago Chinese immigrants, who originally came to work in the Australian gold fields, used wild bananas growing around Innisfail and Cardwell in north Queensland to commence the first commercial plantings around 1883. Cultivated varieties were then brought in from Fiji and by 1890 the Cairns district had produced some 15 million bunches which represented over half of Queensland's production.

The plantations run by the Chinese had disappeared by the early 1900's but by this time the industry had become firmly established in south east Queensland and northern New South Wales. These two areas dominated production until the late 1970's. See Prime Growing Areas for where we're grown today.

When we're ripe we're great to eat out of hand, making us ideal for school lunches and snacks. Simply peel our skin and eat or add us to your favourite fruit salad. Toss or brush us with orange juice to stop us browning.

Use slightly firmer bananas for baking, grilling, frying, barbecuing or microwaving. Serve us with meat or fish or add us to sauces or curries.
A good way to use very ripe bananas is to mash us and add us to cakes, pancakes, puddings, muffins, breads, ice creams, smoothies or sandwiches.

Banana Pops
Cut 2 bananas into bite size pieces. Push a paddle pop stick into each and dip banana into 85g melted cooking chocolate mixed with 1 tablespoon copha. Stand on a non-stick tray and freeze for 2 hours.